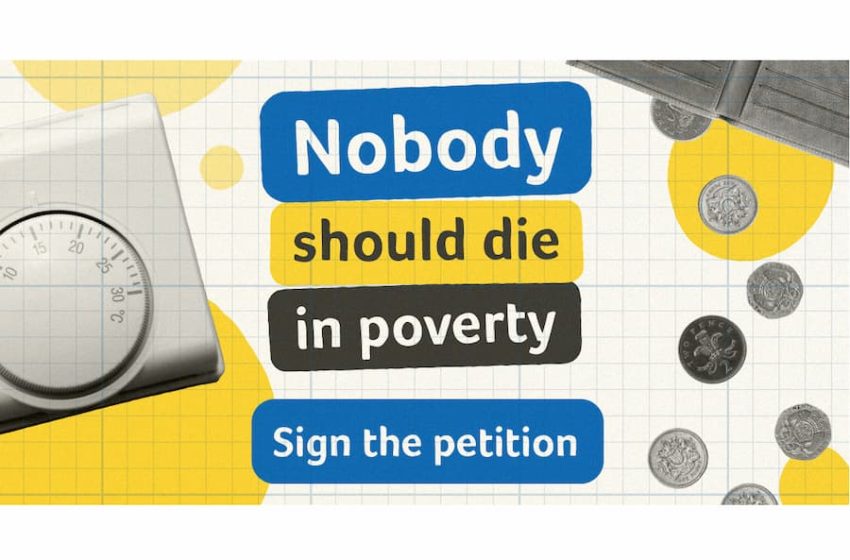 A petition launched by Marie Curie to put an end to death in poverty is nearing 80,000 signatures.

This follows the Dying in poverty report published by Marie Curie earlier this year, which revealed that a shocking 90,000 people die in poverty in the UK each year – the equivalent of 10 people per hour. Marie Curie’s Mark Jackson, Policy Manager for England, said:

“Pensions are meant to be there for us at the end of our lives. But if you’re unfortunate enough to die before 65, you miss out – even if you’ve paid into the system your whole life.”

Marie Curie highlighted one notable case, that of Cheryl, 61, who has a terminal cancer diagnosis. Cheryl worked all her life, yet her and her husband are relying on credit cards to make ends meet. She is entitled to no state pension.

Marie Curie have stated that people under 65 who are terminally ill are most at risk, with more than one in four (28%) dying in poverty. This makes those who die at working age more than twice as likely to be in poverty than those who die past pension age.

The costs of living with a terminal illness – such as higher energy bills, home adaptations and care – can reach as much as £16,000 a year. These costs, combined with the fact that many people are forced to reduce or give up work, make it no surprise that so many working age people are pushed into poverty after a terminal diagnosis.

The risk rises again for parents with dependent children, with two out of three facing poverty at the end of their lives if they die before retirement age. This can mean entire families living in poverty.

The cost of living crisis

Anyone who has paid a gas bill or been to the petrol pump lately will be well aware that we are facing a cost of living crisis. Financial hardship amongst terminally ill people is an issue that predates the current crisis, but will no doubt be worsened by it.

On average, a person’s energy bills double once they’re diagnosed with a terminal illness – that’s before any recent price rises. As the cost of living crisis deepens, we need decisive action to stop more and more people falling into poverty at the end of their lives.