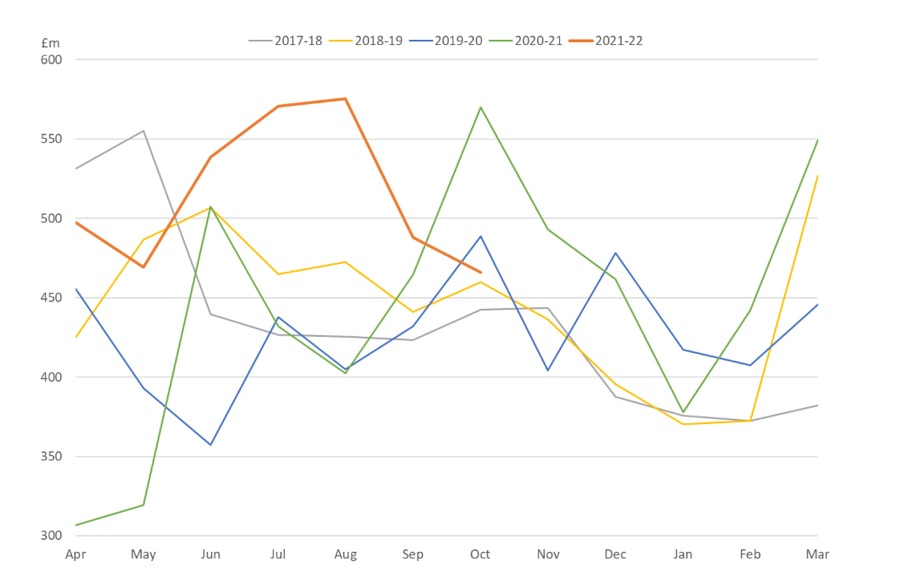 HMRC figures show a £0.6bn increase in inheritance tax (IHT) receipts in the first half of 2021/22 than in the same period a year earlier.

£3.6bn in IHT was collected between April and October 2021, a 20% increase on the same period a year earlier.

“higher volumes of wealth transfers that took place during the Covid-19 pandemic, though HMRC cannot verify this until full administrative data becomes available.”

Commentators have suggested that the increase could be down to the significant increase in house prices which this week were reported up 11.8% over the year to September, at a record average of £270,000.

“With inheritance tax thresholds frozen, which is viewed as a stealth tax rise, more people will be facing IHT bills following the sales of their homes.”

Although the last 2 months has seen a dip in IHT income compared to earlier this year, the trend is very much on an upward trajectory says Andrew Gillett, Head of Wealth Management Advice at BRI Wealth Management.

“Although there is a modest fall in IHT receipts in the last couple of months, the general trend is that IHT tax receipts continue to rise with them being £0.6 billion higher than equivalent period a year earlier.”

“This has certainly been the trend over the last few years and not a surprise bearing in mind the rise in equity and house prices since the lows at the start of the pandemic coupled with the freezing of allowances.”

“We were surprised to not see any legislative changes in the recent budget when you consider the government continues to need an uplift in revenue. It is likely more families will pay inheritance tax in the coming years due to the freezing of allowances until 2026.”

But, he suggests, there will be further reform to come.

“Pre the pandemic, there were several reports published by the Office of Tax Simplification and an All Party Parliamentary Group suggesting that there could be some reforms to IHT including amendments to lifetime gifts, the interaction of CGT with other allowances such as business and agricultural property relief and also the exemptions. We think it is likely that we will see reform; it is just difficult to know when.”